The story below tells briefly of our beginnings and sets the stage for the work that we're committed to today!

Many people know that Orion Family Services is dedicated to helping young people rise and excel from places of defeat and hopelessness. But few know that the Wisconsin-based ministry can trace its own roots to a story of survival and perseverance.

Before incorporating in 2001, Orion operated for 12 years as Sunburst Family Services (SFS), a branch of Sunburst Youth Homes (SYH) in Neillsville, Wis.

Sunburst Family Services offered group and foster-home services, and in-home family therapy to more than 300 children and 100 families each year throughout 12 Wisconsin counties.

When Sunburst Youth Homes suffered overwhelming financial losses and closed its doors in 2000, its board encouraged Sunburst Family Services to become an independent agency, preserving its success and carrying on the Sunburst mission. 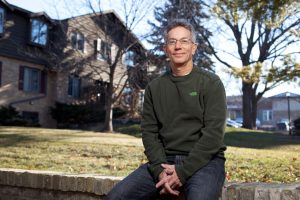 “We were desperately trying to figure out how to keep our part of the organization alive,” said Hugh Meyers, former SFS manager and CEO for Orion Family Services.

The staff faced a devastating blow when Sunburst Youth Home’s creditor recalled its loan and emptied its bank account. To regain control, the board encouraged another agency, Lutheran Social Services (LSS), to step in and begin a new operation on the Neillsville campus. It also gave Lutheran Social Services a green light to assume the agency’s programming.

Faced with widespread job cuts and the loss of the Sunburst identity, SFS managers took matters into their own hands. Hugh Meyers, along with Teri Davis and Stacey Parke, went to a free consultation for small-business planning. Meyers says they left the session in a “giddy fog.”

“We were supposed to meet with LSS managers to share information about our programs and contracts,” Meyers said. “We asked to postpone the meeting so we had more time to sort things out and immediately starting thinking of a name for the new agency.”

The group wanted the new name to spring from the Sunburst title, and settled on Orion, the most recognizable constellation in the winter night sky.

What happened next would set the trajectory for the new organization.

Lutheran Social Services set up a meeting with SFS’ 50-person staff to talk about the takeover of the programs and the process for recruiting staff into its organization.

“Not a single staff member showed up to that meeting,” said Meyers. “They had all decided that they would put their faith in trying to keep what we created over the previous 12 years alive. And as a result, LSS was forced to walk away.”

“Unbeknownst to us, she had remarried since leaving Wisconsin, and she put her husband on the phone, who turned out to be Tom Vanden Berk, the CEO of UCAN.”

Uhlich Children’s Advantage Network (UCAN), a child-services agency serving more than 12,000 children, youth and families each year, traces its history in the Chicago area back 140 years.

The very next day, UCAN pledged to help Orion by co-signing a line of credit and providing technical support for the startup.

Thanks to a lot of hard work, the transition was seamless. Not one staff member left the newly formed organization, and all staff were maintained at the same salary and benefit levels. Every county government department re-contracted with Orion, and all state-based licensing agents saw to it that Orion had proper licenses and certifications right away. No children or families saw their services disrupted during the entire process.

One year later, Orion secured its own financial arrangements with a Madison bank.

Thanks to a small group of individuals dedicated to its mission, Orion now serves more than 350 children and 110 families each year throughout 10 counties in Wisconsin.

“Orion is a remarkable agency for both its survival as a small business and for the quality services it offers to many troubled children and their families,” Meyers said.